1 February is St. Brigid’s Day, which has been celebrated for hundreds of years in Ireland. Who was St. Brigid, how is her day celebrated today and what are her links to a much older Celtic Goddess?

According to the story recorded by an Irish Catholic priest, Saint Brigid was born Brigit and her mother was Brocca, a Christian baptised by Saint Patrick. Her father was Dubthach, a Leinster chieftain and Brocca’s slave master. When Dubthach’s wife discovered Brocca was pregnant, she was sold to a Druid landowner. When Brigid was born, she grew up pure and virtuous and the stories state that she fed the poor and healed the sick. At age ten, Brigid was returned to her father's home, as he was still her legal master. Brigid’s charity did not end when she left her mother, and she donated Dubthach’s possessions to anyone who asked. Dubthach tired of Brigid’s charitably nature and took her before the king of Leinster. Whilst Dubthach spoke to the king, Brigid gave Dubthach’s jeweled sword to a beggar, so he could barter it for food for his family. The king witnessed this and convinced Dubthach to grant her freedom saying, “her merit before God is greater than ours.”

On being freed, Brigid returned to the Druid and her mother, now in charge of the Druid's dairy. Brigid took over from her mother and often gave away milk. However, the dairy still prospered and the Druid eventually freed Brocca. Brigid’s father Dubthach, had arranged for her to marry a bard, but she refused and made a vow to always be chaste. She devoted her life to the church and at age 40 founded the Church of the Oak, a monastery, which was built above a pagan shrine to the Celtic goddess Brigid, beneath a large oak tree.

Whether St. Brigid is a real historical figure is a matter of great debate. Her feast day was originally a Celtic pagan festival called Imbolc, which marked the midpoint between winter and spring. Some scholars suggest that St. Brigid is a Christianisation of the goddess Brigid. Others believe she was formerly chief druid at the temple of the goddess Brigid. When she converted to Christianity, she then transformed the temple into a Christian monastery. After her death, the name and characteristics of the goddess became attached to the saint. St. Brigid was made one of Ireland's three patron saints, alongside St. Columba and the more famous St. Patrick. Since 2018, St Brigid’s Day Festival in London has become an annual celebration. St. Brigid’s Day is a time to celebrate the enormous creativity and talent of women and is now celebrated at Irish Embassies and Consulates worldwide. 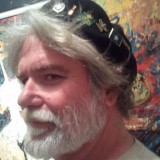 I few years ago I went to a St. Brigid celebration with 10 other women everyone brought something to eat.
The Hostess made an incredible rich rice pudding plus she embroidered for each of us a St. Bridget cross & framed it!
I did not know a lot about this very generous saint .. thank for your imput
I have the famed pic. Along with other sainted pics !